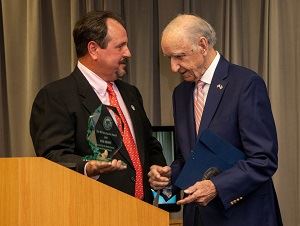 Mr. Jack Brown, a lifelong resident of Gaston County, has devoted much of his life to the advancement of our County. A graduate of Belmont High School and a Veteran of the United States Army, Jack is a passionate public servant. As a County Commissioner, he was held in great esteem by his fellow Board members for his enthusiasm to serve, for his unwavering principles, and for being "poised every day for the fight to make this County a better place."

Jack's service on the Board of Commissioners began with his first elected term on December 6, 2004. He was called to serve the Commission once again on October 9, 2018, as the Gaston County Republican Party's appointment to the vacant Gastonia Township seat. He was elected as Vice-Chairman in 2019 and held that position until he departed the Board in 2020.

Throughout his many years of public service, Jack faithfully supported initiatives that positively impacted the County's growth, especially in economic development and land use. An advocate for "smart growth" in the County and Region, Jack fervently encouraged community and stakeholder collaboration in all development decisions.

As a Commissioner, Jack always sought fiscal and budgetary accountability with a strong focus on reducing the tax rate for Gaston County citizens. He always held a genuine concern and desire to address head-on the many challenges facing Gaston County citizens. At the onset of the 2020 COVID-19 pandemic, Jack advocated for the expansion of Family Advisory Board grant funding to provide immediate assistance to at‐risk populations impacted during the crisis.

Jack and his wife, Alice, who was the former Register of Deeds in Gaston County, have two children together and are blessed with five grandchildren and two great-grandchildren. He and Alice are members of Friendship Baptist Church in Belmont.

His service to Gaston County has earned him much deserved recognition over the years. In 2021, both Jack and his wife, Alice, were honored as recipients of the Order of the Long Leaf Pine, the highest award for public service granted by the Governor of North Carolina.

Jack, the County Commission is forever grateful and indebted to you for your many years of service and your continuing efforts to make Gaston County a better place to live. Your frontline and behind-the-scenes work is inspiring and has touched many, many lives.