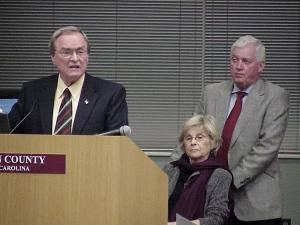 Randy Vinson is no stranger to Commission meetings. As Chair of the Gaston College Board of Trustees for the past 3 years, he has spent many nights in this room speaking on behalf of and supporting the College and the College's needs.

But tonight he is here so we can show our appreciation for all of his hard work. And actually, Randy's relationship with Gaston College began many years before his appointment to the Board when he worked to establish the College's first interactive classrooms.

Since being on the Board, Randy has played an important role in a long list of accomplishments at the College. Those include a successful Bond Campaign in 2004 which will fund the new David Belk Cannon Health Education Center and the Jerry W Cochrane Science and Technology building, construction of a driving track for emergency and police training, and a smooth transition of incorporating the North Carolina Textile and Technology Center into the East Campus. Additionally, as Chair of the Facilities Committee, Randy has overseen the development of a Facilities Master Plan.

Randy is known as a consensus builder and has been instrumental in building cohesiveness on the Board of Trustees.

He was described simply as the right person at the right time for the College Board of Trustees.

Dr. Martin Murphy is described as a quiet, natural leader who can keep things running smoothly and moving forward without fanfare or any desire for recognition.

As a steadfast, dedicated member of the Board of Health for 6 years, Martin has been part of many significant changes at the Gaston County Health Department including the opening of a satellite maternity clinic. Also during this time, the Health Department was able to cut county funding while experiencing unprecedented, double-digit growth… a remarkable accomplishment.

Martin served as Chair of the Health Board for 2 years. During that time, the Health Department became one of the first in the nation to receive accreditation.

During his tenure, Martin has also taken the time to mentor new board members and help them get up to speed with complicated issues.

Beyond the Health Department, Martin also serves on the Board of Directors for Habitat for Humanity where he is a member of the Construction Committee, frequently taking on the role of contractor and solving construction issues for Habitat houses.

He is described as a great volunteer and the kind of person who is always there when you need him.

It is not an overstatement to say that Dr. Murphy has played a vital role on the Health Board and in the community at large.

The first words out of anyone's mouth when you ask about Don Warren are: "He's a great guy."

Well, we don't give awards for just being "a great guy" (although it helps). Tonight we recognize Don as a community servant and humanitarian.

As a retired textile executive, Don was a natural to tap for the Charlotte Regional Partnership. Because of his international business experience, Don brings a well-rounded perspective to the table on how best to attract business to the region. During his 4 years of service, Don has been an active vocal member of the Partnership.

Don also served 8 years on the Gaston College Board of Trustees, where his love of the College was obvious to all who worked with him. During those years, he helped secure funding for the College and served on the Personnel and Academic Affairs committees as well as Chair of the Facilities Committee.

As an active member of Rotary, Don is currently leading an effort to establish clean water for the Chorti Indians in Honduras.

He is described as being driven by compassion and is known both here in the United States and in Honduras as a man who can get things done.