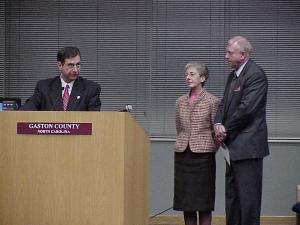 Anyone who knows Jerry Campbell knows what it's like to be greeted by his big smile. His upbeat personality and enthusiasm are one of his trademarks, and of course, make him enjoyable to work with. His concern for his community and his willingness to become involved has kept Mr. Campbell a busy man.

Mr. Campbell has been a faithful member of the Planning Board for 7 years, where he currently serves as Vice-Chair. He was also a member of the Mountain Island Lake Marine Commission for the past 4 years and was just recently appointed to the Quality of Natural Resources Commission. Additionally, He served on the Comprehensive Plan Steering Committee and currently serves on the Unified Development Ordinance Steering Committee.

As Chair of the Mountain Island Lake Marine Commission, Mr. Campbell was known for his patience and positive attitude. He worked very closely with the Lake Wylie Marine Commission to keep the lines of communication open and coordinated joint meetings between the two commissions. He also worked to prepare and make presentations on behalf of the Marine Commission related to the inter-basin transfer.

As a home builder and developer, he brings that perspective to the table when considering issues. However, he has the ability to look at both sides of an issue and is always ready to listen and look for a compromise. He has proven to be a valuable liaison between the county and homebuilders on many occasions including the transition to County enforcement of the Soil and Sedimentation Control Ordinance.

On behalf of the Gaston County Board of Commissioners, it is my honor and pleasure to present Mr. Jerry Campbell with the William Gaston Award.

Mrs. Ferguson is one of those special people who have a genuine passion for what she does. That's obvious from the fact that she has served on the Nursing Home Community Advisory Committee for 12 years. And this is not one of those committees that just meets and makes decisions. As a member of this committee, Mrs. Ferguson visits every nursing home in Gaston County 4 times a year. That's about 50 visits every year for the past 12 years.

Her motivation is simple. She wants to make sure our seniors living in nursing homes are receiving the best care possible. To that end, she has faithfully made the visits, developing relationships with residents, staff, and management at each nursing home along the way.

While Mrs. Ferguson is described as a nice, caring person who is unassuming and just makes you want to do the right thing, she's no pushover. She is very firm in pointing out issues and problems as they arise, making sure they are corrected. Once she decides what she needs to do, she just does it.

Mrs. Ferguson is an important member of her committee who encourages camaraderie. Even though she has seen a lot of changes in the committee and its leadership, she has remained steadfast and has worked to make the committee strong.

There's one more thing I'd like to mention about Mrs. Ferguson. Not only does she visit the nursing homes as part of her committee work, but she often makes the time just to go visit on her own, sometimes bringing gifts to residents, but more importantly, just giving of herself to brighten the day of someone who may just need to see a warm smiling face.

Mrs. Ferguson is one of those rare volunteers who is making Gaston County a better place every day by reaching out to those who need an advocate and a friend. It is with great pleasure that I present Mrs. Shirley Ferguson with the William Gaston Award. 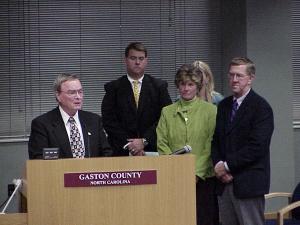 When you hear names like Dole, National Gypsum, and DSM Desotech, you might not immediately think of Mr. Neil Styers. But he has been a faithful member of the Economic Development Commission for 5 years, working behind the scenes to bring companies like those to Gaston County.

During his time on the EDC, Mr. Styers has been part of guiding the County through significant changes, including expansions of both the Summit on Court Drive and the Technology Park, modifications to incentive policies and staff expansion including a marketing director and a project coordinator.

Mr. Styers isn't looking for any pats on the back. His dedication comes from a sense of civic responsibility. He grew up in Gaston County and takes pride in his community. As the owner of a local business, he has a sincere desire to improve the economic condition of the County, knowing that it will have a direct impact on the lives of those who are in need of a job and benefit all of Gaston County by making the economy strong and viable.

Mr. Styers has been a good community leader and servant in many ways over the past years, being involved in the PTA when his children were young, and with the Chamber of Commerce and as a member of Gaston County's Industrial Facilities and Pollution Financing Committee for the past 17 years.

He is described as a quiet, unassuming person who only speaks when something intelligent needs to be said.

It's always a pleasure to recognize one of the steadfast behind-the-scenes workers who make up the backbone of our community. I would like to personally thank Mr. Styers for his many years of service to the County. It is my privilege to present him with the William Gaston Award on behalf of the entire Gaston County Board of Commissioners.