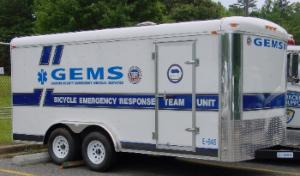 The team is utilized to provide medical support at events when large crowds are expected or when an event covers a large geographical area. GEMS looks at the bike team as a staffing and cost-effective alternative for handling requests for event coverage. The team also works in the school system providing bicycle safety classes and assisting with bike rodeos for both children and adults alike. The BERT was incorporated into the Gaston County Emergency Management Urban Search and Rescue team (USAR) to assist with search and rescue situations in the county. The team can be activated at a moment's notice for a search and members can be utilized for first in or hasty teams. One benefit of the BERT is it can cover more ground in a short time frame and quickly cover search areas. All Gaston County EMS personnel are certified at the Basic Rescue Technician level (BRT) and are currently upgrading to the Emergency Rescue Technician level (ERT). 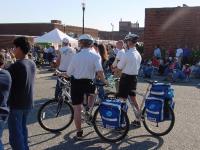 The team began with 24 members in 1997 and most are EMT-Paramedics. Members logged more than 4,200 miles in training in 1997 including both on and off-road rides. Membership is open to all GEMS full-time, part-time, and auxiliary personnel as well as the GEMS Explorer program. The Explorer program is open to youth ages 14 to 18 years of age and GEMS provides first aid training, hazmat, blood-borne pathogens, and BRT to the Explorer members. The addition of the Explorers to the team gave the advantage of youth and diversity. In 1998 team membership was opened to members of the volunteer rescue squads in Gaston County and this provided more depth of coverage for events and stand-bys. The team currently has 30 active members. 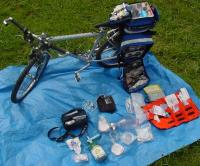 Emergency medical services on bicycles is a fairly new concept. Gaston EMS has always been active in the area of physical fitness so the idea of a bike team seemed to fit. Interested employees put the team together and were so dedicated to the idea that they purchased their own mountain bikes to get the team off the ground. In the spring of 1998, Gaston EMS purchased eight 1998 Raleigh M80-style bicycles. Equipment for the team was looked at and researched in the early planning stages of team development. The equipment would have to be adequate for providing the needed patient care but the size and amounts were carefully discussed. The equipment the team needed would have to be light enough to carry but in-depth enough to sustain patient care until a transport unit arrived on the scene. Once the list was compiled the kits were stocked with equipment including but not limited to oxygen, Life Pack 5 or 500, IV and airway supplies, and medications. Each bike is fitted with rack packs and saddlebags that provide the needed storage area and support for the supplies. The kits are also easily removed from the bikes to allow for situations where members must leave the bike to make patient contact. Each team member also carries a fanny pack of supplies that are commonly needed at large gatherings such as bandages as well as band-aids, alcohol preps, etc. 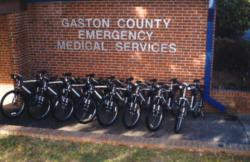 The bike team has become one of the most recognized and most popular facets of Gaston County EMS. The team has been the focus of numerous media stories and has been recognized at both the local and state level for the work they have done. This concept has allowed for Gaston County EMS to get more involved in the community and to get more in touch with the people. The GEMS bike team has shattered the image of EMS in Gaston County. The interaction between the public and team members shows that EMS is more than ambulance drivers. The jobs are the same but the vehicle is different. This makes us more approachable to children and adults alike. The BERT has been good for the department. We have benefited from the PR, the savings on man-hour utilization and unit hour utilization, the cost of the project, and in patient care.

Gaston County EMS is more than willing to assist any other organization in their starting a Bicycle Emergency Response Team. GEMS has assisted services nationwide in developing similar projects. If you're interested in obtaining information concerning bicycle emergency response teams, contact 704-866-3210.