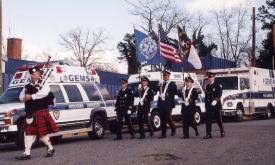 The Gaston County EMS Honor Guard, formed in 1997 as the first EMS Honor Guard in North Carolina, was started to honor the memory of our fallen brethren, in the EMS profession, at funerals as well as other memorial functions. It quickly grew and word spread across the state of its availability. This created the opportunity for the Honor Guard to serve many functions in the public safety community. They participate in community functions honoring national holidays as well as serve as an Honor Guard at funerals of public safety personnel when requested. Other functions the Honor Guard will participate in include but are not limited to, parades, memorial services, official government ceremonies, and public safety conferences.

Since the formation of GEMS' Honor Guard, there have been numerous events served. The Honor Guard has provided the colors during the opening ceremonies for the National Association of Emergency Medical Technicians (NAEMT) conference in Winston-Salem, NC, the National EMS Expo in Charlotte, NC sponsored by Emergency Medical Services Magazine, as well as for the Emergency Medicine Today conference sponsored by the North Carolina Office of EMS (OEMS) in Greensboro, NC. The Honor Guard has been invited and participated numerous times at the National EMS Memorial Service in Roanoke, VA as well as participated in numerous parades and funerals to honor fallen comrades. 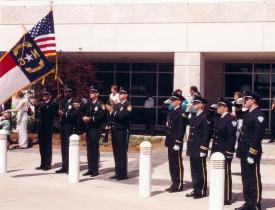