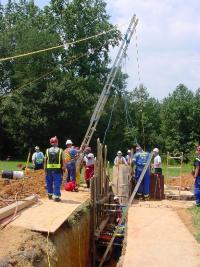 Specialized Tactics and Rescue Team took form in 2000. As early as 1994, GEMS began to require that all personnel take and complete the Basic Rescue Technician course to be certified by the State of North Carolina. The reasoning behind this was to expand the knowledge of GEMS personnel to at least an awareness level to better serve the citizens of Gaston County during a rescue situation. All personnel was trained through Gaston College during a two-year period. Once the state of North Carolina went to a single level for rescue Emergency Rescue Technician (ERT), a bridging class for all personnel was necessary. After this was completed, the Director researched Gaston County's rescue capabilities concerning the specialized areas of Trench, Structural Collapse, and Confined Space. Several volunteer departments had attended specialized classes, but no county-wide organized effort had been made. Immediately, the hazard of placing GEMS personnel in an involved rescue situation were properly trained rescue personnel may or may not be present was recognized. A plan was put into action to train GEMS paramedics to the technician level certification in specific areas of rescue. This would serve two purposes: (1) GEMS would have paramedics trained to operate and provide an advanced level of care in dangerous rescue situations and (2) there would be a county-wide group of personnel with training and equipment to mitigate the situation. The ultimate goal of the STAR Team is to take Advanced Life Support to the patient no matter where the patient is or what the situation.

GEMS initially sent 45 personnel, soon to be the Specialized Tactics and Rescue Team (STAR Team), through the first class. Trench rescue is a 40-hour class that was held at Gaston College Regional Emergency Training Center. The City of Gastonia Fire Department's Special Operations Team also joined the class; this created about 80 personnel in the county who would be attending the series of specialized rescue training. 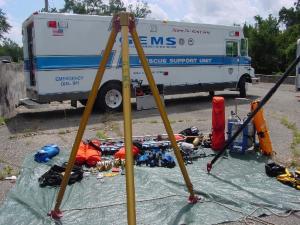 A 32-hour Confined Space class was then held, followed by 80 hours of Rescue Systems I and II, all taught through Gaston College Regional Emergency Training Center. In Rescue Systems I, personnel learned how to build raker shores, vertical and horizontal shoring techniques, as well as lift and move heavy objects. Rescue Systems II built on the training received in Rescue System I, adding breaching and breaking. Upon completion of these classes, there was approximately 80 personnel between the GEMS STAR team and the City of Gastonia Fire Department who were certified at the technician level to respond to specific rescue situations within Gaston County.

STAR team personnel continued to expand their training and certifications by attending Swift-water Rescue Technician I and II (SRT), Fundamentals Urban Search And Rescue (FUNSAR), as well as another rescue associated training. This in turn supports the local rescue squads and fire departments responding to difficult rescue scenarios in the county. 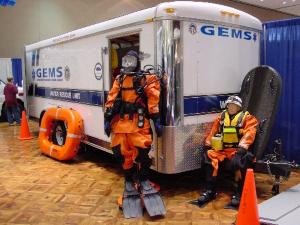 In 2002, four STAR Team members, who were certified as Open Water SCUBA Divers, were sent through Dive Rescue International's Public Safety Diver's course (Levels I and II) to receive specialized training for conducting search and rescue operations in a water environment. This group of divers would be the initial members of the GEMS Dive Rescue and Recovery Team. The ultimate goal is to put trained personnel in the water to locate and retrieve the victim quickly for the purpose of resuscitation.

After all training goals were achieved, it was decided to move on to achieve recognition from the North Carolina Association of Rescue and EMS for capabilities and equipment. All qualifications needed were met for Trench, Confined Space, Water Rescue, and Swift-water Rescue, and the STAR Team is officially recognized by the State. It is also important to note, that the STAR Team has received the same training that is federally mandated for FEMA USAR teams. To remain proficient in the skills and training is essential to an effective team, STAR Team training is held during an even number of months while off duty. This training is specific to the initial classes and incorporates portions of each during all classes.

The first vehicle to carry rescue equipment was an old ambulance that was gutted and modified with shelving to transport the rescue equipment to the scene. Next a 16' trailer was purchased to house and carry our Trench and Structural Collapse equipment. This allowed for some space in the modified ambulance, but it still was inadequate. In 2002, the purchase of a Freightliner step van completed the final transition to meeting the needs of the team. The vehicle is a Freightliner MT55 Chassis with a 24' box. A trailer that was donated is now used to house a 17' Zumro inflatable boat. The STAR Team has continually purchased equipment to be used for supporting Gaston County's other rescue agencies, as well as for mutual aid in surrounding counties, but as assistance, not duplication. Monetary and policy support is provided to local rescue squads, and support through response is provided for local fire departments.

On February 24, 2003 two boaters were playing in the rain-swollen South Fork River when they became trapped in the river on a rock. The STAR Team was tested that day. The event involved many different agencies and had a lot of media coverage. The end result of a lot of teamwork and resolve was two lives saved. A reenactment of the event aired on The Weather Channel in September 2003. It was a group effort with no one department being able to accomplish it alone.